Review: How to Be An American Housewife

Once you leave Japan, it is extremely unlikely that you will return, unless your husband is stationed there again or becomes wealthy.

Take a few reminders of Japan with you, if you have room. Or make arrangements to write to a caring relative who is willing to send you letters or items from your homeland. This can ease homesickness.

And be sure to tell you family, “Sayonara.”

–from the chapter “Turning American,” in Tamiko Kelly and Jun Tanaka’s, How to Be An American Housewife (1955).

“I had always been a disobedient girl. When I was four, we lived in a grand house with a courtyard and a koi fishpond. My father worked as a lawyer and we were still rich, rich enough to have beautiful silk dresses and for me to have dolls with real hair and porcelain faces, not the corn-husk dolls I played with later.”

When I initially picked up this book, it was because, again, I liked the cover. (Ohh! Shiny object. Pause). Yeah, I am goober for being drawn by some books covers. Especially when I collect so many old books that are just solid colors and old-looking and well, definitely don’t have any beauty aesthetically. However, the times have changed and I am drawn to some books with pretty pictures on the front, and then I read the back. After reading this, and the inside back cover, I figured this could be an interesting read.

It was!! This book is partially based on the author’s and her mother’s personal experiences. Her father really did give her mother, Shoko, a guidebook called The American Way of Housekeeping when they first married after World War II.

What was so interesting about this book? Learning of different aspects of the Japanese culture and how a woman gave up that culture and her ties to it so she could move to the U.S. Back during those times, trying to assimilate into the American culture was beyond difficult. The themes in the book really focus on mothers and daughters and the different ways we communicate, or fail to communicate. There are also the prejudices and stereotypes in society and how Shoko’s guidebook also supports raising sons differently from daughters. We also see different types of motherhood and how time has changed these roles.

In so many ways it is heart breaking, and in others really quite funny. The book begins with a mystery and you follow it along with Shoko, who is no longer able to travel due to health issues, and who sends her daughter and granddaughter to Japan to find her last remaining relative. Her brother who she has been estranged from. The book goes back and forth between the past and the present; between Shoko narrating, and Sue, Shoko’s daughter.

It was an enjoyable read, and it took me maybe 3-4 days of reading it. (About an hour or two a night). I came away with a good feeling, an interest in learning more about Japanese culture, and wanting to establish my own traditions and work on my communication with my own daughter. I think it was a good read.

(Again, will be taking this to the Butt Club (book club) and suggesting to the girls). Hope you enjoy it and don’t forget to giggle.

So I have begun the fun “Award Winning Reading Challenge” proposed by the Insatiable Booksluts! These gals are bad-ass! But before we get to all their fun, I want to write reviews for two books I have read recently that I absolutely LOVED!! I am borrowing () the template for reviewing from the Booksluts. (Just gotta love that name!! I want to be just like them, hehe… but still be me).

As I used to be able to read a book a day, with Sunshine here I average about a book a week… if she lets me. Some of the books took me a little less or more to read in a week. Maybe about an hour a night, so to speak. But I enjoyed them, so I will write a review for them. If I really hated it, I may still write a review, but that looks doubtful.

The Heretic Queen by Michelle Moran

First Lines: “I am sure that if I sat in a quiet place, away from the palace and the bustle of the court, I could remember scenes from my childhood much earlier than six years old. As it is, I have vague impressions of low tables with lion’s-paw feet crouched on polished tiles. I can still smell the scents of cedar and acacia from the open chests where my purse stored my favorite playthings.”

Genre/Rating:  Historical Fiction/ 4.5 out of 5 Stars

The Heretic Queen was a surprising find. I was ambling down an aisle in a store and saw it sitting there. I like the Egyptian histories and at heart believe I was a lost archaeologist in another life. (but ask me about that some time and I will tell you I had A LOT of other lives). I saw the cover and the title, and thought, “Hmm. Why not?”

I enjoyed this book immensely. The main character is Nefertari, who was named after her aunt, the Heretic Queen, Nefertiti. Nefertari has lost her whole family and lives in the palace under the current Pharoah’s watch. She is the last of her line, and is despised of because of what her Aunt did and even what her mother did in order to protect her. She is pushed aside and thought little of. (Of course I will not reveal what the issues were as it would ruin the story, but if you are familiar with Egyptian history you may already know).

Her best friends are Ramesses, the Pharaoh’s son and prince regent, and Asha who later becomes the General of the Ramesses armies. You learn about their antics together, and Nefertari’s quest to become one of Ramesses wives, and most of all, Chief Wife.

This story gives life to a much beloved Queen or Chief Wife in Egypt. Turns out that Nefertari’s tomb is the grandest and most 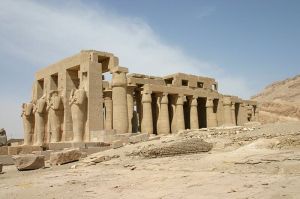 Nefertari's tomb is lavishly decorated tomb, QV66, is the largest and most spectacular in the Valley of the Queens.

visited, along with Ramesses Ramesseum. This story is blended with true battles, societal festivals, actual artifacts and temples built at that time, and filled with intrigue about that current time in history. It brings back to life the trials people faced, and put a face to the dangers they encountered, and a person you could really associate with in today’s times.

For me, this book didn’t lag at all. You get right into it and want to keep going to find out what happens next. You are torn from this age and thoroughly engrossed in 1283 B.C. and on. The life and times of Egypt are brought to such vivid detail, one can’t help but be mesmerized by the descriptions. I didn’t give it 5 stars, (mostly cause I rarely ever give 5 stars) because some of the fiction and truth were difficult to discern (though she does explain some of these at the end of the novel, and doing your own research can solve some of that as well). I figure if a book ever makes you want to research more about the time and era when it took place, it is a good book to share.  It was engaging and at times I couldn’t put it down. I plan to share with my book club (Butt Club) in two weeks. Overall, I would recommend this book. I hope you enjoy it!!!